Orono boys get by Hermon to reach regional final


BANGOR- The Orono Red Riots boys basketball team are playing their best at the perfect time. The Red Riots went on an 11-0 run and earned a 52-41 win over Hermon in a Maine Principals’ Association class B semifinal game on Wednesday afternoon at the Cross Insurance Center. 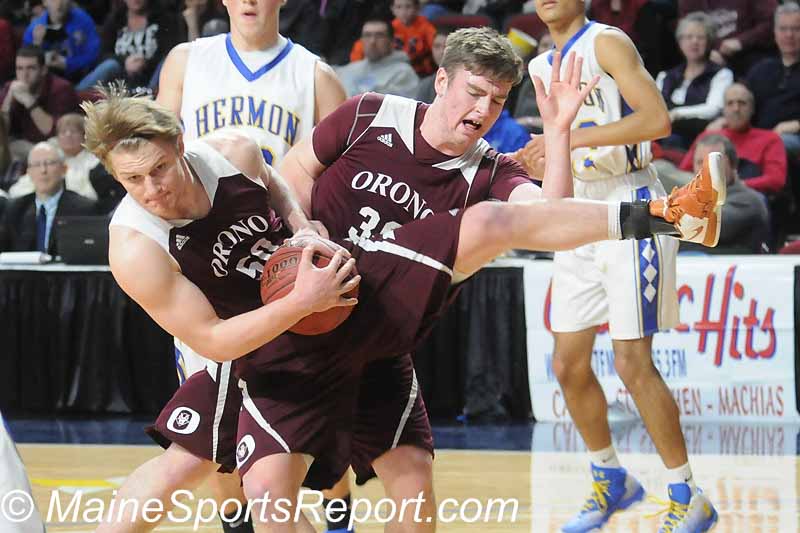 Orono's Keenan Collett (50) and Connor Robertson collide battling for a rebound during the first half of the Class B North semifinal game against Hermon at the Cross Insurance Center on Wednesday. Orono won the game 52-41. (Photo by Skip Hawkes)

The game had seven lead changes in the first half, with the Hawks holding an 18-16 halftime advantage. Hermon started the second half strong, holding a 25-20 lead with five minutes left in the third quarter.

Orono went on an 11-0 run capped by a Nate Desisto three pointer to take a 31-25 lead. Cody Hawes made a three pointer to cut the Hawks deficit to 31-28. That would be the last time the Red Riots lead would be under four. 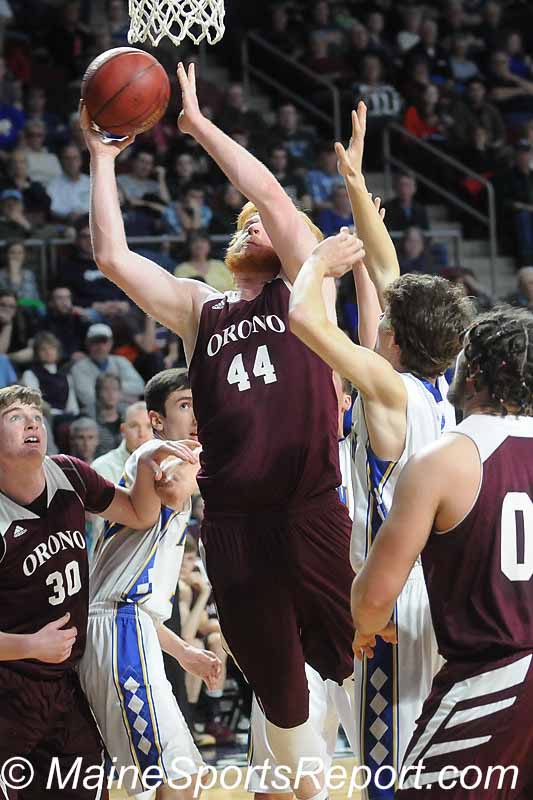 Orono's Jackson Coutts (44) gets up for a layup. (Photo by Skip Hawkes)

Orono shot 17-25 from the free throw line, including 13-19 in the fourth quarter to secure the victory. The Red Riots had their four senior starters finish in double figures.

“We have been playing together for god knows how long. Hermon is an excellent team, a lot of respect for them and a lot of respect to their coaching staff,”Orono senior guard Keenan Collett said. “The difference is we have been their before. Our experience came though a little bit.” 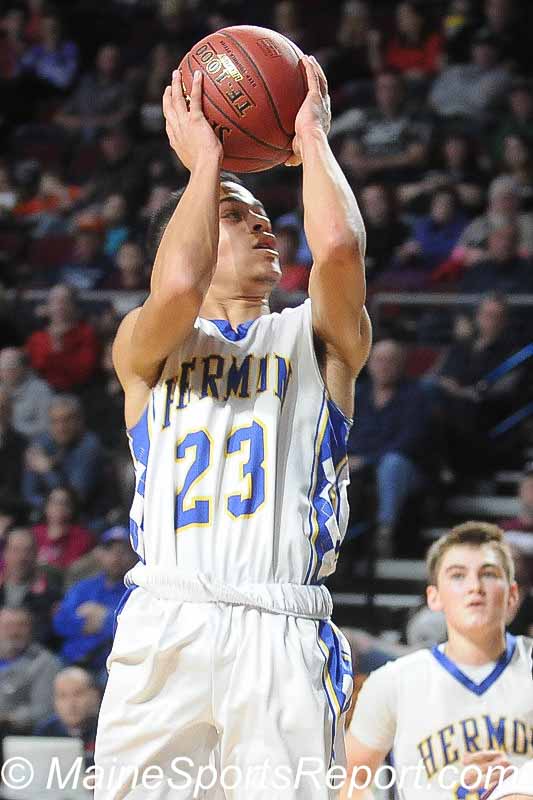 Hermon's Keenan Marseille (23) goes up for a shot. (Photo by Skip Hawkes)

This will be the third regional final appearance for this group of Orono seniors. The focus isn’t to get there, but to finish what they started.

“We talked about it yesterday at practice. One of them brought it up. They want to finish what they started,”Orono coach Jason Coleman said. “As sophomores we made it to the (regional) finals. We got moved up a class and last year we made it to the finals. They brought that mentality to work everyday. We don’t try and win regionals in December.” 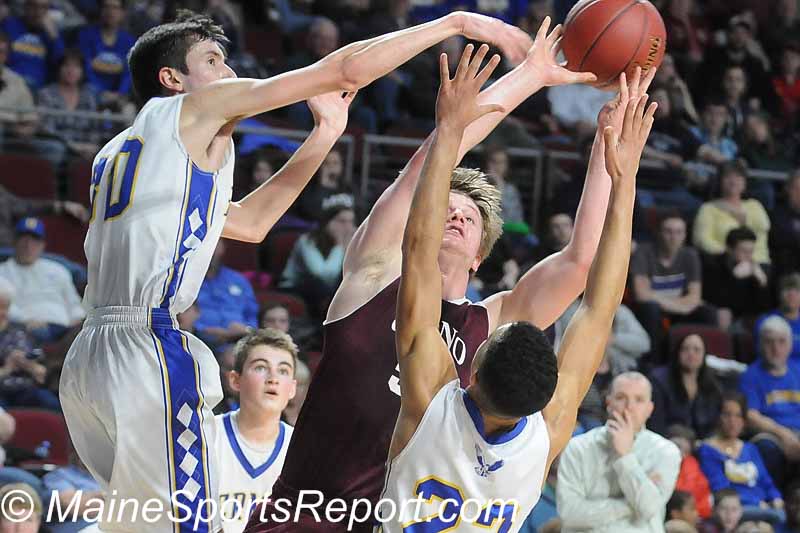 Hermon's Isaac Varney (left) blocks a shot by Orono's Keenan Collett during the second half. (Photo by Skip Hawkes)

Orono fell to Hermon twice during the regular season. Keenan Marseille and Garrett Task combined for over 30 points in each of those games for the Hawks. The duo combined for six on Wednesday afternoon.

“They (Hermon) are so athletic. Their guards rebound really well. We went to a triangle and two. We wanted to take Marseille and Trask out of the game. Not sure how many they finished with combined. Both games (in the regular season) they finished with over 30 combined,”Coleman said. “We wanted them to try and beat us inside the three point line. We knew (Isaac) Varney was going to get his. We didn’t want Marseille and Trask to beat us, we wanted other kids to beat us.” 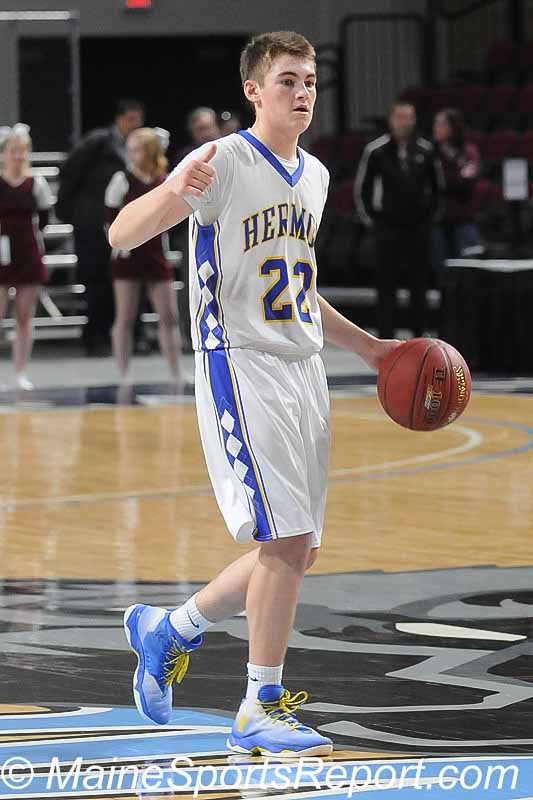 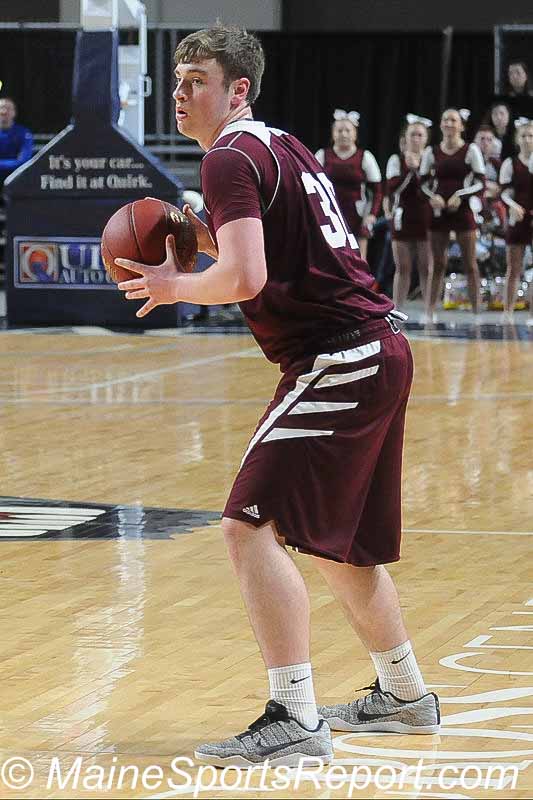 Kent Johnson and Varney led the Hawks with 11 points each. Marseille and Jordan Bishop put in six points each, Cody Hawes had three, while Tyler Hawes and Joel Bergeron chipped in with two points each. Hermon finishes the season with a 17-3 record.