BANGOR - Three starters scored in double figures Wednesday afternoon, led by 13 points each from Paige Plissey and Megan Tracy, to lead the No. 1 Hermon Hawks to a 47-34 Maine Principals’ Association Class B semifinal girls basketball win over No. 4 Old Town at the Cross Insurance Center. 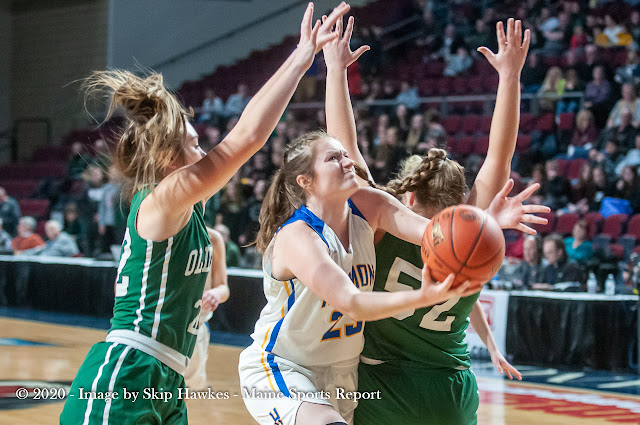 Hermon's Megan Tracy (center) slips between Old Town defenders Lexi Thibodeau (left) and Claudia Damboise for a shot during the Class B North semifinal game at the Cross Insurance Center in Bangor on Wednesday. Hermon defeated Old Town 47-34 in the game. (Photo by Skip Hawkes)

Click here to continue article>>>
Posted by Skip at 6:52 PM No comments:

GLENBURN - Sunday afternoon at the Glenburn School, the Lawrence Bulldogs 5/6 girls nearly gave the game away during the fourth quarter, but they managed to hold on long enough to pull out a 38-32 win over Old Town Y to claim the Glenburn Rec 5th/6th grade girls tournament championship. 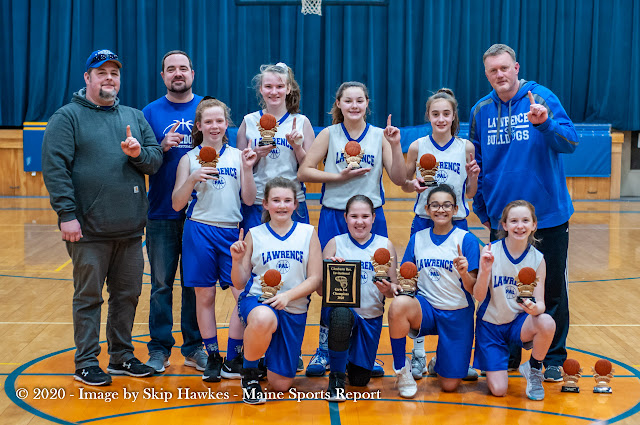 The Lawrence 5/6 girls and coaches pose for photos after winning the Glenburn Rec 5th/6th grade tournament with a 38-32 victory over Old Town Y. (Photo by Skip Hawkes)

Click here to continue article>>>
Posted by Skip at 12:31 PM No comments:

Sunday afternoon at the Glenburn School, the Old Town Y girls defeated Presque Isle 23-20 and Lawrence needed overtime to come away with a 35-31 victory over Bangor in the Glenburn Rec's 5th/6th grade basketball tournament semifinal games. 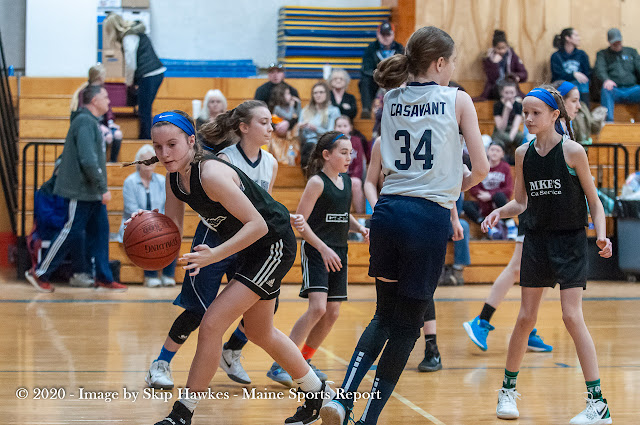 Click here to continue article>>>
Posted by Skip at 9:08 AM No comments:

Broncos hang on for win over an aggressive Mt. Blue

AUGUSTA – When this game started not one person I had talked to expected to witness the game No. 8 Mt. Blue came to play against the No. 1 seeded Hampden Broncos. Not only did the Broncos have nothing to lose in this matchup, but they also played like they were going to win.


Click here to continue article>>>
Posted by Ron at 7:41 PM No comments:

No. 5 Brewer takes down No. 4 Messalonskee to advance to semifinal

AUGUSTA – The Brewer boys basketball team made the trip to the Augusta Civic Center Saturday night to take on Messalonskee of Oakland in a quarterfinal matchup that was Brewer's game all the way to the 63-47 win.

Click here to continue article>>>
Posted by Ron at 4:14 PM No comments:

BANGOR – The Cross Insurance Center was buzzing with excitement on one side of the court and silence on the other as No. 9 John Bapst Crusaders had a 3 point lead on the No. 1 Hermon Hawks with the clock down to 2.4 seconds in regulation of this Class B quarterfinal.


Click here to continue article>>>
Posted by Ron at 9:44 AM No comments: 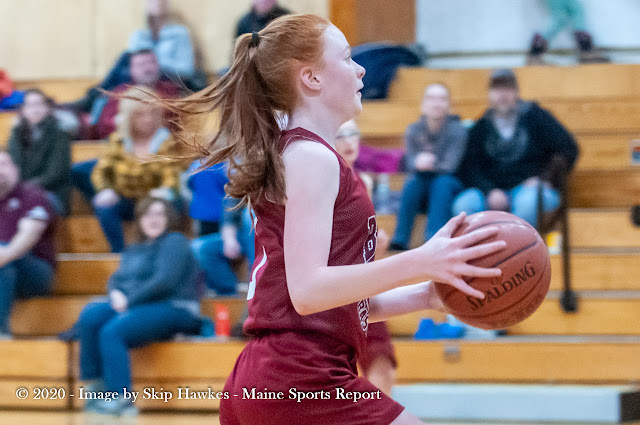 In the first four games of the day, Bangor defeated Lincoln 26-21, Lawrence rolled over Dexter 43-21, Presque Isle dominated Glenburn with a 33-7 win, and Old Town Y cruised to a 38-18 win over Foxcroft. 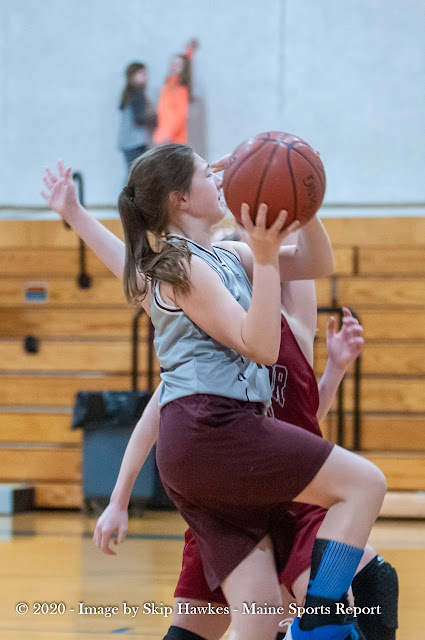 Lincoln's Julianna Cloukey goes up for a shot in a game against Bangor. (Photo by Skip Hawkes)

In the first game of the day, Bangor needed all four quarters to pull out a 26-21 win over Lincoln. The game was tied 17-17 after three quarters, but Bangor out scored Lincoln 9-4 in the final period for the win. 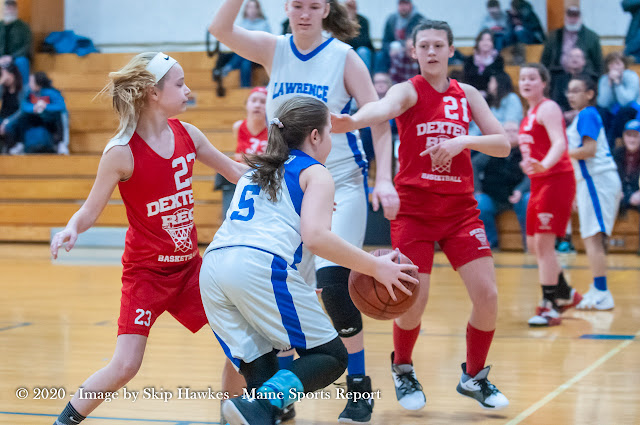 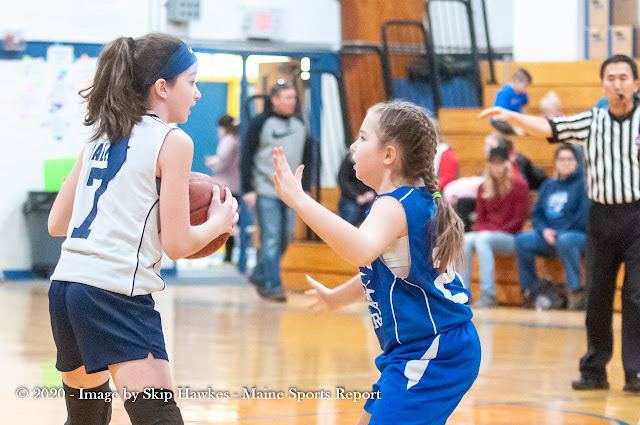 In a major size difference, Presque Isle dominated Glenburn after a 10-0 first quarter holding the Chargers to single digits over the final three quarters for a 33-7 win. 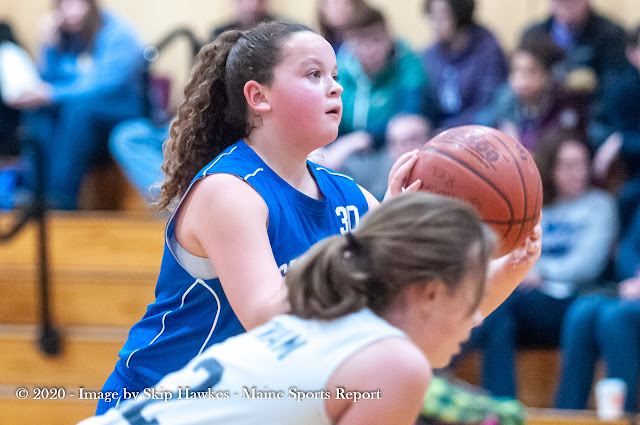 Glenburn's Grace LaBree looks at the basket before taking a foul shot. (Photo by Skip Hawkes)

Eve Wiles, Grace LaBree, and Kaylee Folsom each scored two points and Mallory Lausier added one point to provide the scoring for Glenburn. 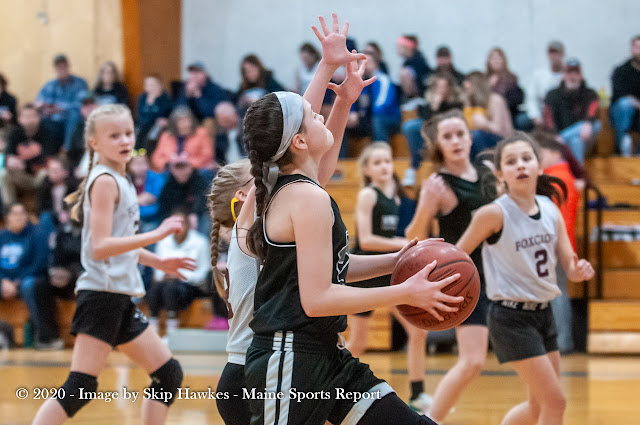 Old Town's Taylor Loring (with ball) looks at the basket on her way in for a shot.
(Photo by Skip Hawkes)

Old Town was led in scoring by Karly Buckwalter with 11 points, Konna Dumond with 10 points, and Taylor Loring with nine points. 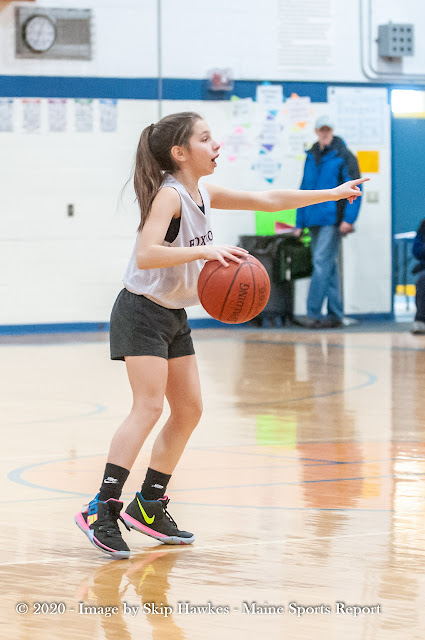 Providing the scoring for Foxcroft was Addie Day with 11 points, Alli Cook with six points, and Alexis Burdin with one point.

All teams return on Sunday with games beginning at 9:00 a.m.

BREWER – The Brewer hockey team hosted Camden Hills of Rockport this afternoon at the Penobscot Ice Arena where they pulled off the huge win over the third-place Windjammers by the score of 4-2.


Click here to continue article>>>
Posted by Ron at 9:54 PM No comments:

BREWER – The Brewer varsity boys took on Skowhegan Tuesday evening in the regular-season finale and captured the win 38-34.


Click here to continue article>>>
Posted by Ron at 6:49 AM No comments: