BANGOR, Me- Emily Wheaton, coming off a 36 point performance in the Presque Isle quarterfinal win, continued her stellar play by scoring 35 points to lead the Wildcats to a 55-52 upset win over top seeded Hermon in a Class B semifinal girls matchup Wednesday afternoon at the Cross Insurance Center. 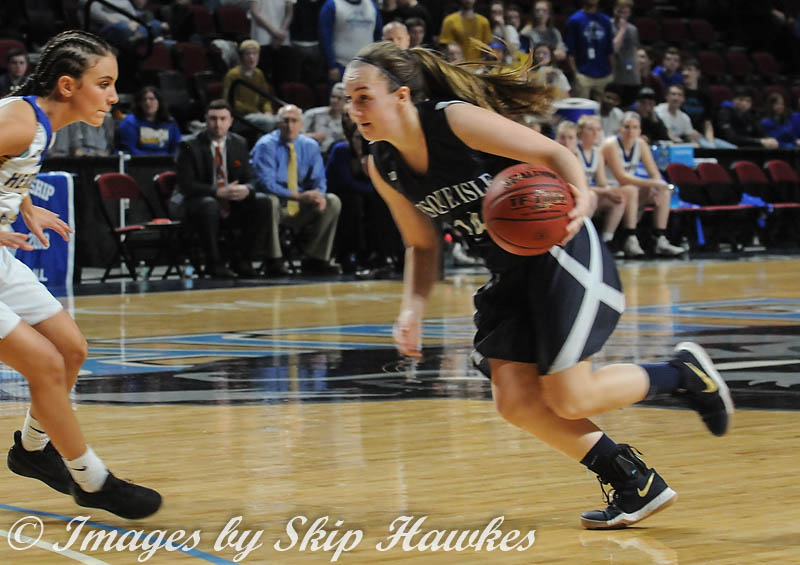 Presque Isle's Emily Wheaton (right) looks to drive past Hermon's Alex Allain during the second half of the girls Class B North semifinal game at the Cross Insurance Center on Wednesday afternoon. Presque Isle won the game 55-52. (photo by Skip Hawkes)

Hermon (17-3), started off strong taking an early 8-3 lead. Presque Isle responded scoring the next 11 points that stretched into the second quarter to take a 14-8 advantage. The Wildcats held a 21-17 lead at halftime.

After Lauren Plissey scored the opening basket of the third quarter to cut it to 21-19, Presque Isle regained control with a 12-4 run. Sydney Thompson hit a three pointer to give the Wildcats their biggest lead to that point at 33-23. Wheaton had eight in the quarter as PI held a 35-29 lead heading to the final eight minutes. 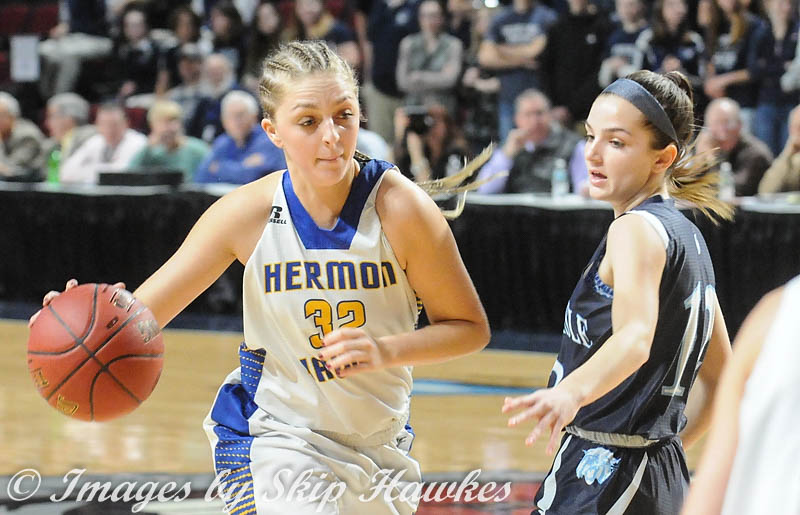 Hermon's Maddie Pullen (32) looks to drive past Presque Isle's Madison Michaud during the first  half. (Photo by Skip Hawkes)
Wheaton connected on a pair of free throws early in the fourth quarter to give the Wildcats their largest lead of the day at 43-31. Wheaton was 8-9 from the line in the quarter, and scored 12, giving her 20 in the second half. Hermon hit a last second three pointer to make the final deficit three, but trailed by 6-10 points for most of the last quarter.


Hermon was led by Plissey, who scored 15 all in the second half. Grace Page added six, while Alex Allain, Gabby Chasse, and Madisyn Curtis all chipped in five a piece. Wheaton added four rebounds and two steals to go with her game high in points. Maggie Castonguay added a pair of three pointers to finish with six, while Thompson finished with five. Wheaton needs 27 points Saturday in the regional title game against Winslow to break the Northern Maine record for most points in a regional tournament, held currently by Emily Ellis of Mount View in 1981.

Presque Isle and Winslow will square off in the Class B Northern Maine title game at 2:05 p.m. Saturday afternoon.