GLENBURN - After falling to Lincoln the night before (9-6) for their first loss of the tournament, the Hermon Hawks were a different team on Tuesday night as they put together some base hits and used their speed and defense to come away with a 7-3 victory over the same Lincoln team to capture the 2019 District 3 softball 11/12 all-stars championship. This was the 14th District 3 championship for the Hermon softball program. 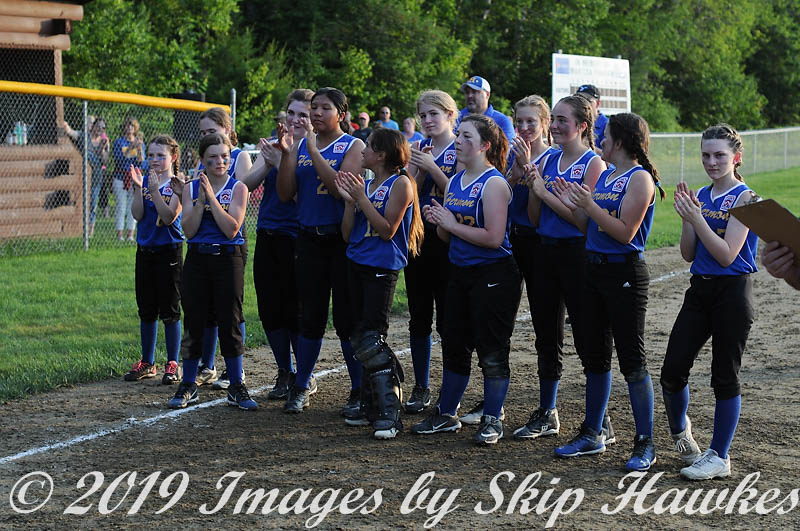 Hermon players applaud while the Lincoln team receives their tournament pins after the Hawks pulled off a 7-3 win to claim the District 3 softball 11/12 Championship. (Photo by Skip Hawkes)

After a scoreless first inning for both teams, Hermon scored two runs in the second inning and never gave up the lead the rest of the way. Ava Dean reached on a walk, stole second base, advanced to third on a wild pitch, and came in to score on an RBI bunt single by Addison Waning for the first run. Waning would later score on and RBI ground out from Jadyn Krueger for a 2-0 Hermon lead. 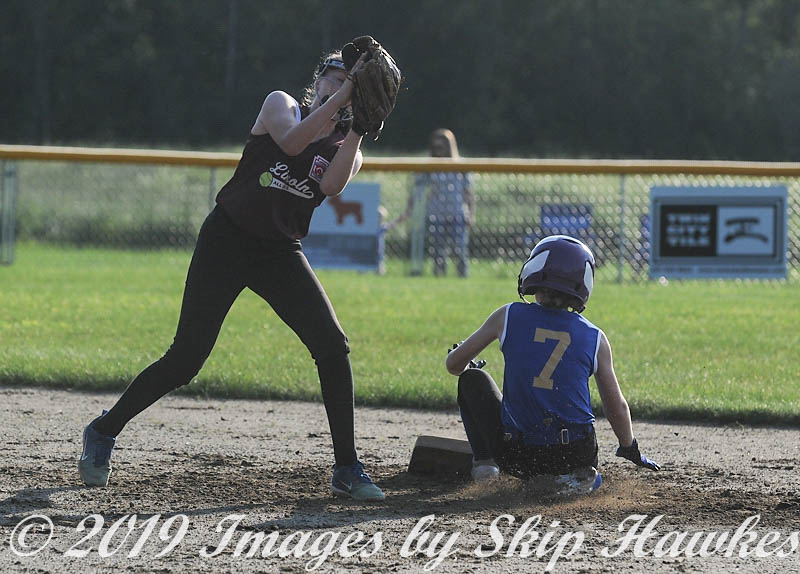 Hermon's Ava Dean (7) slides into second base with a stolen base. (Photo by Skip Hawkes)

Lincoln added a run in the bottom half of the second inning on an RBI single by Kaitlyn Thornton to cut the Hermon lead in half 2-1. 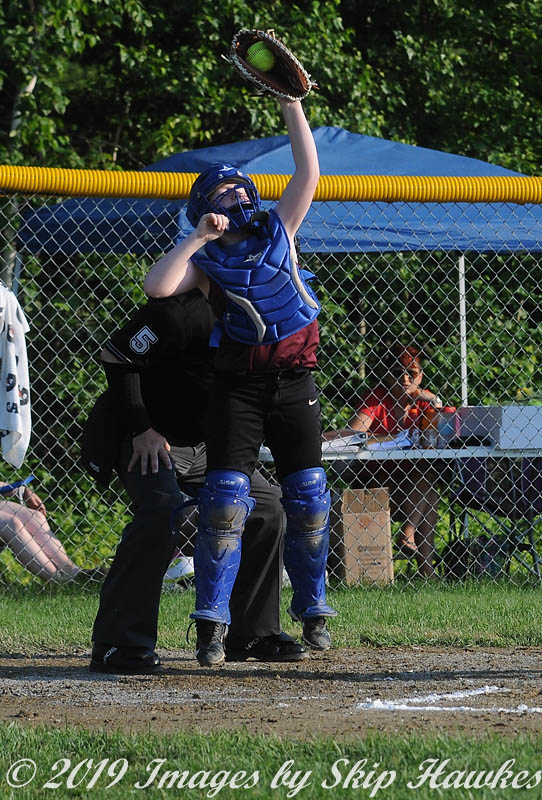 The Hawks opened up a four run lead when they plated 3 runs in the third inning on a hit batter and back to back bunt singles by Olivia Johnston and Katie Fowler followed by a fielders choice to give Hermon a 5-1 lead.

Fowler was instrumental in the Hermon win from inside the circle, as the held Lincoln scoreless over the third, fourth, and fifth innings. With some defensive help behind her turning a double play, Fowler retired eight Lincoln batters in a row over those same three innings allowing her offense to pile up a 7-1 lead heading into the bottom of the sixth inning. 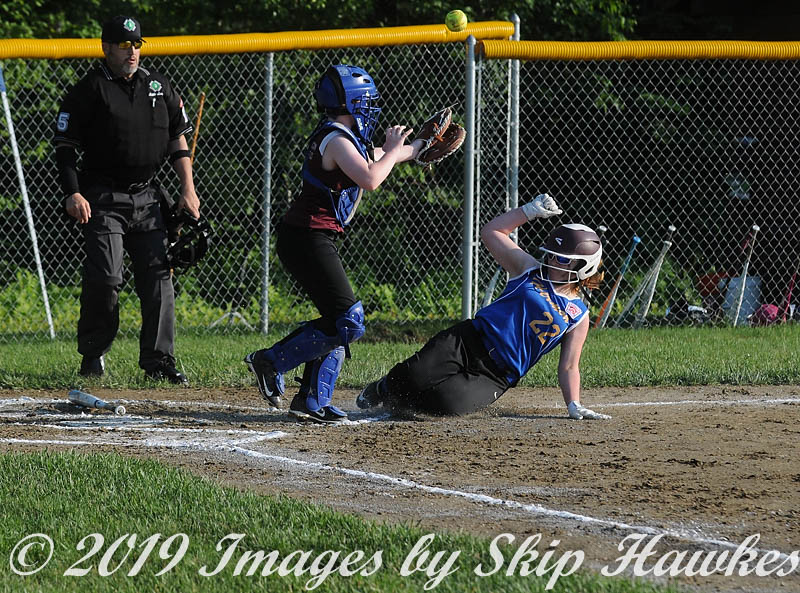 Lincoln led off the bottom half of the sixth inning with a triple by Emma Potter. Following a strikeout, Amara Perfect reached on a Hermon error. Potter scored, and Perfect came all the way around to score on a wild pitch to cut the Hermon lead to the eventual winning score of 7-3. Hermon's Fowler retired the next two batters on a ground ball back to the circle and a line drive right back to Fowler for the third and final out of the game. 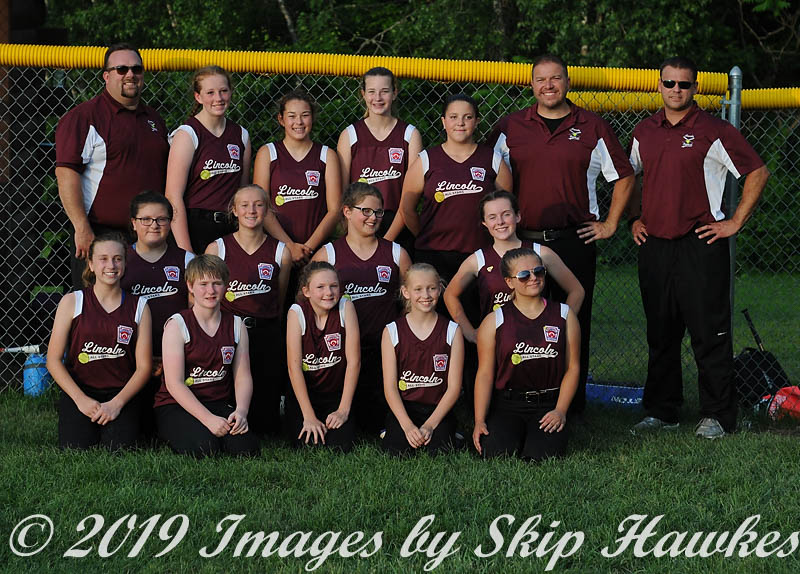 The Lincoln team posed for a team photo following the conclusion of the game. (Photo by Skip Hawkes)

Fowler picked up the win from inside the circle, working all six innings allowing just four hits. She gave up three runs, two earned, while walking just one batter and striking out four. She also helped her own cause at the plate with a bunt single and an RBI double. 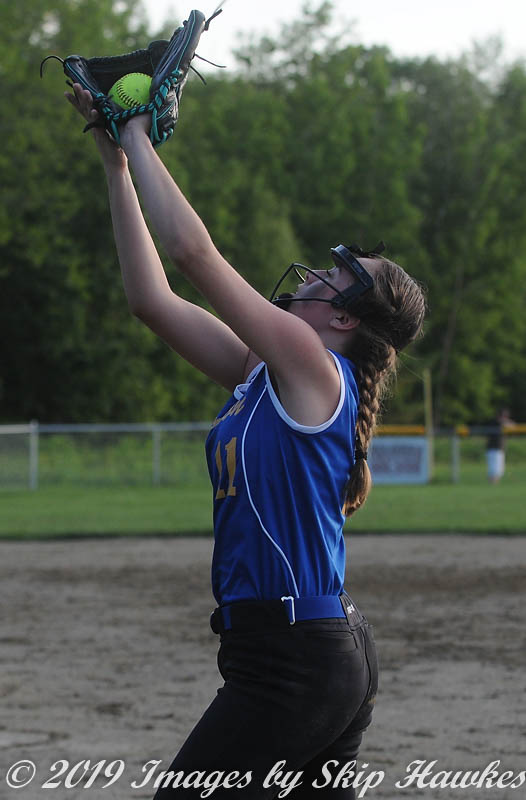 Hermon's Jadyn Krueger catches a fly ball at first base for an out. (Photo by Skip Hawkes)

Hermon now advances to the 11/12 State Tournament that begins on Sunday, July 7 in Glenburn. The Hawks have a bye, so will play their first game on Thursday, July 11. 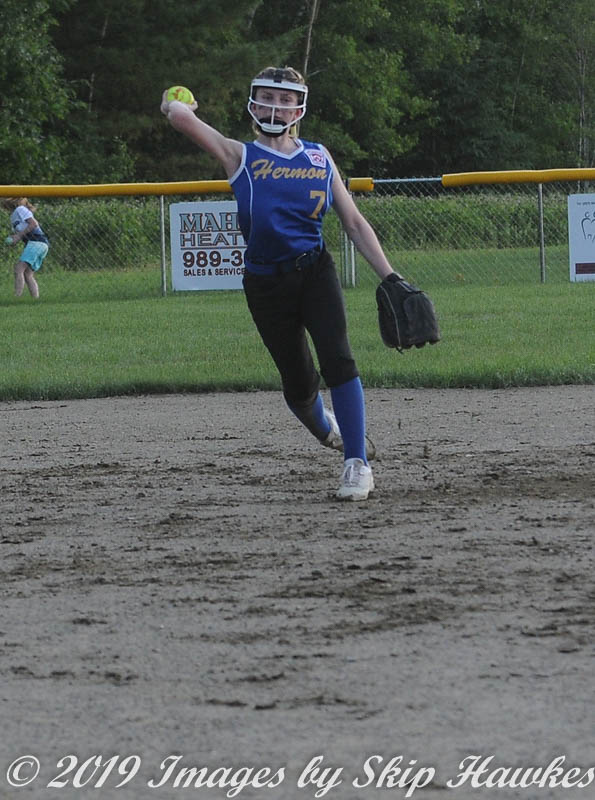 Hermon shortstop Ava Dean makes a throw to first base to retire a Lincoln batter. (Photo by Skip Hawkes)