Friday night at the Cross Center in Bangor, Niko Knapp and Ryan Hoogterp combined for 39 points as the Old Town Coyotes pulled out a 49-42 victory over the John Bapst Crusaders in a Class B North schoolboy game. 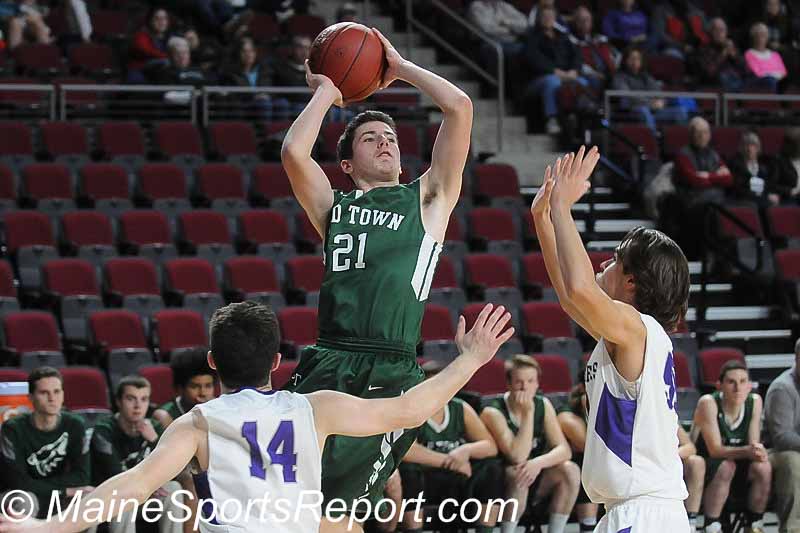 Old Town's Ryan Hoogterp gets up for a jump shot over John Bapst defenders JJ Higgins (14) and Noah Tonah during a game at the Cross Center Friday night. Old Town won the game 49-42. (Photo by Skip Hawkes)

The two equally talented teams  played to a 19-19 tie by the half time break. Old Town took a 26-23 lead mid way through the third quarter, and stretched that lead to 32-23 with 1:51 remaining in the period on a Ryan Hoogterp 3-point basket. The Coyotes closed the quarter with a six point, 36-30, lead. 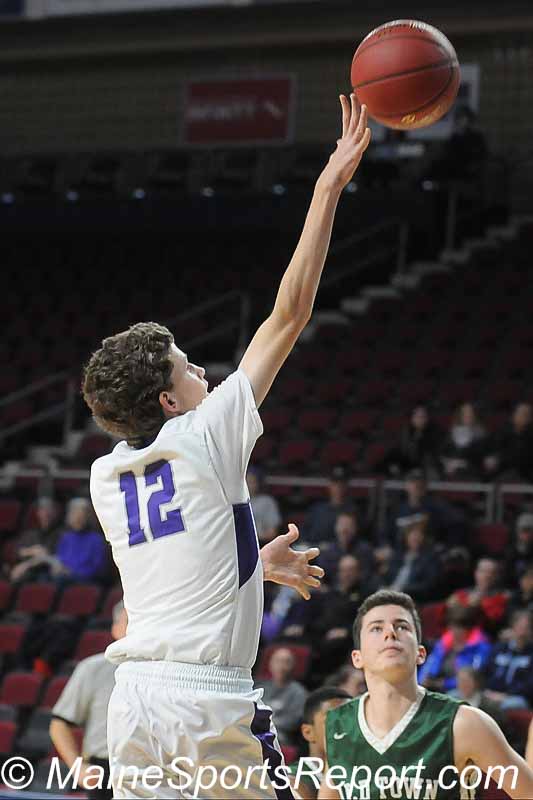 John Bapst's Darren Hanscom puts up a shot in the first quarter. (Photo by Skip Hawkes)

John Bapst opened the fourth quarter on a 5-2 run to make it a three point game (38-35) with 4:01 left to play. The Crusaders pulled to within one point of the Old Town lead when JJ Higgins knocked down two foul shots with 1:42 left on the clock for a 40-39 Coyotes lead.

After a Travis Spell free throw, Niko Knapp pushed the Coyotes lead to 43-39 on a layup with 38 seconds remaining. Knapp added four free throws over the next 24 seconds to extend the Old Town lead to 47-40, and Hoogterp wrapped up the scoring with two free throws. 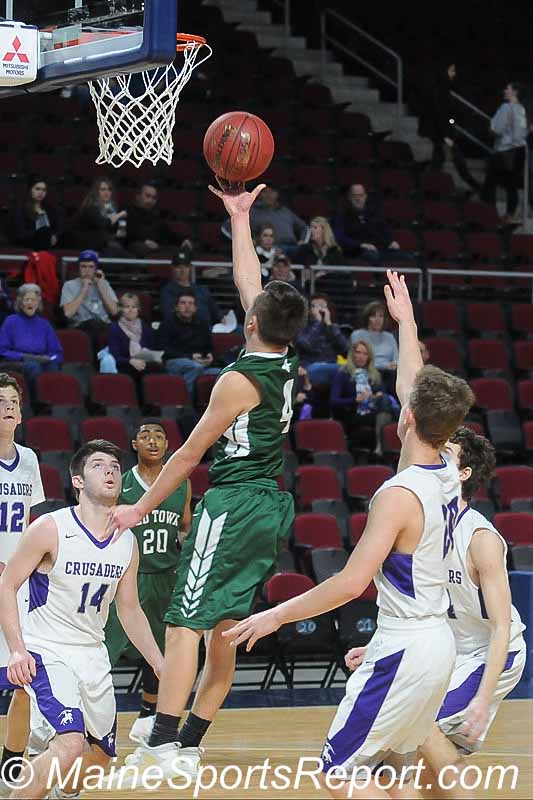 Old Town's Niko Knapp (4) puts up a shot in the middle of three John Bapst defensers. (Photo by Skip Hawkes) 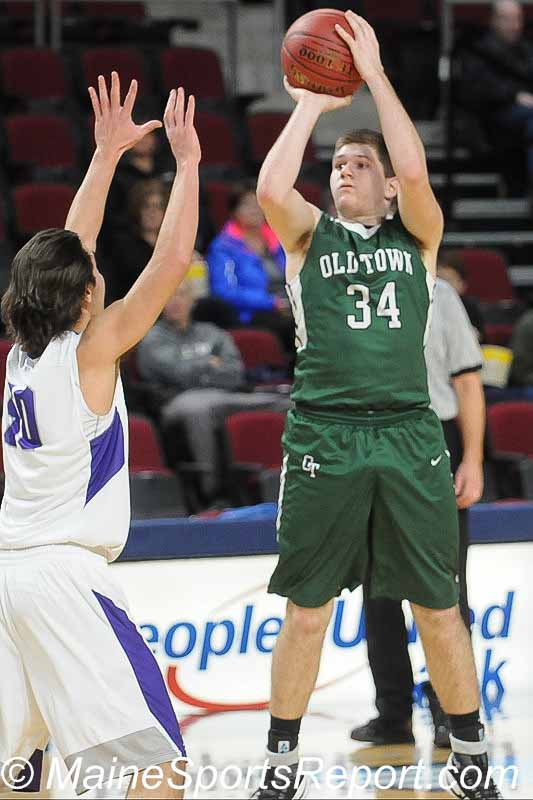 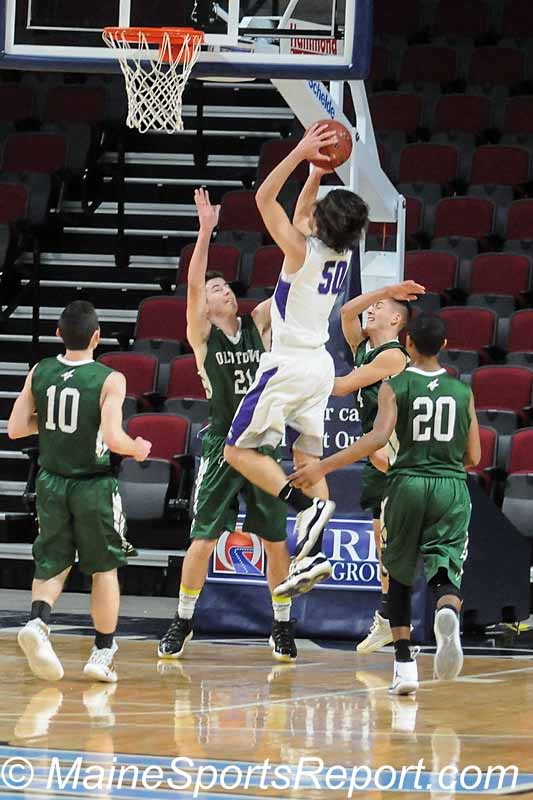 John Bapst's Noah Tomah (50) gets up for a shot in the middle of four Old Town defenders. (Photo by Skip Hawkes) 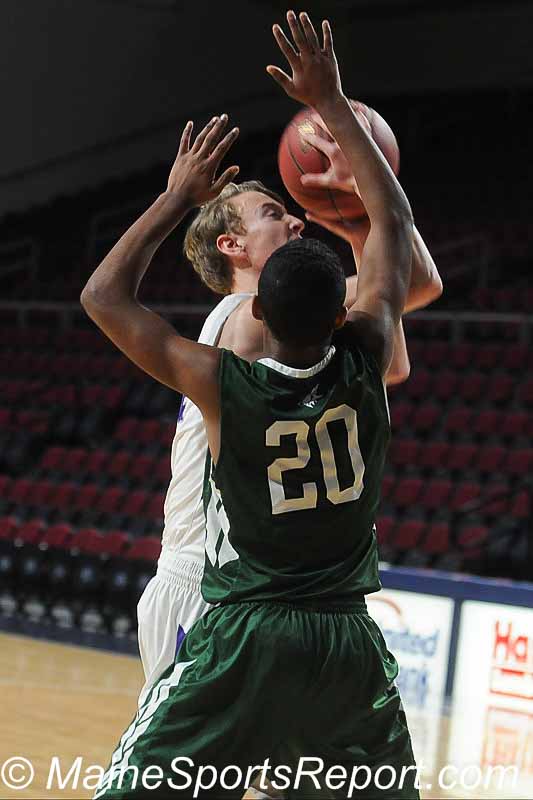