HERMON - Earlier in the season, the Hermon 5th/6th grade Gold football team played Newport to a 0-0 score through three quarters. In the fourth quarter, Newport found the end zone with under three minutes to play and won the game 8-0. Fast forward to Sunday afternoon, and Hermon was a different team. Led by Kobe Hills with six touchdowns, the Hawks romped to a 50-22 win in what was called by more than one coach "our best game of the season." 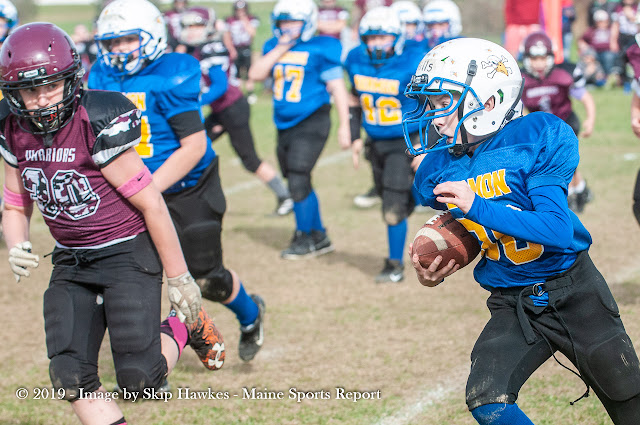 Hermon's Kobe Hills (right) keeps an eye on a Newport defender during a 5th/6th grade game in Hermon on Sunday. Hills scored six touchdowns as Hermon won the game 50-22.
(Photo by Skip Hawkes)

Click here to view the photo gallery from this game

Hills had a game all kids dream of. His six touchdowns came on both sides of the ball. He ran for three scores, had two touchdowns on interceptions, and scored one on a fumble recovery. On his six scores, Hills totaled 290 yards.

Hermon scored twice in the opening quarter. Hills punched in the first score from 12 yards out, and the second score came on a Hills fumble recovery that he returned 70 yards to put the Hawks up 14-0. 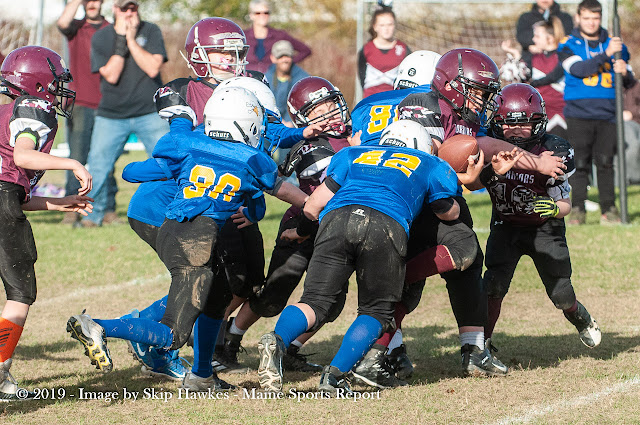 Hermon's Jacob Murzyn (42) puts a hard hit on a Newport runner for a tackle.
(Photo by Skip Hawkes)

Hermon sandwiched two touchdowns around a Newport score in the second quarter. Hills scored on a 24 yard run with 6:22 left in the half, and as the clock turned to 0:00 to end the quarter James Brocato threw a pass to Tyler Priest who ran the ball 45 yards for the touchdown giving the Hawks a 30-8  lead at the halftime break. 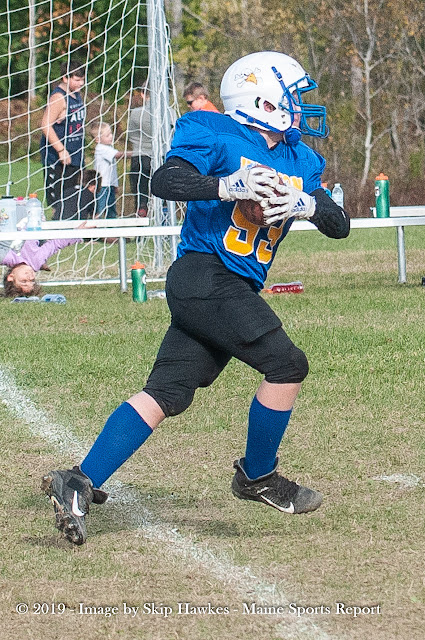 Hermon's Tyler Priest catches a pass and romps 45 yards to the end zone to end the first half.
(Photo by Skip Hawkes)

Hills picked off a Newport pass with 10:22 left in the third quarter and ran it back 65 yards for a touchdown giving Hermon a 36-8 lead. Newport added a 2-yard score with 4:23 left to cut the Hermon lead to 36-14 going to the fourth quarter. 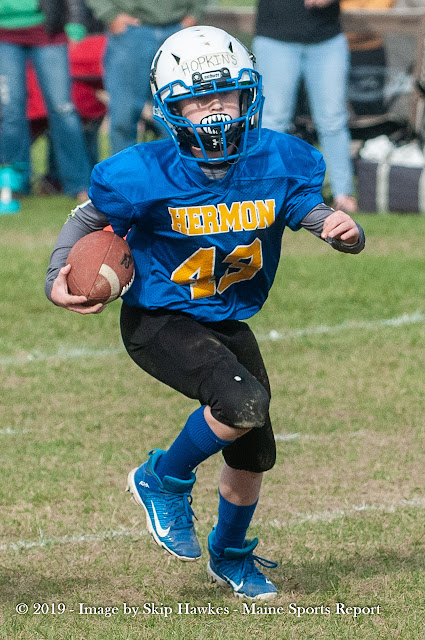 Hermon's Sam Hopkins carries the ball for a gain in yardage. (Photo by Skip Hawkes)

Newport added another touchdown just under four minutes into the final period to make it a 36-22 Hermon lead. That would be as close as the Warriors would get, as Hills scored two more times in the final quarter. His fifth score of the day came on a 54 yard run with 7:15 left in the game, and with 4:35 to play he picked off another pass and ran it back 65 yards for the final score of the game. 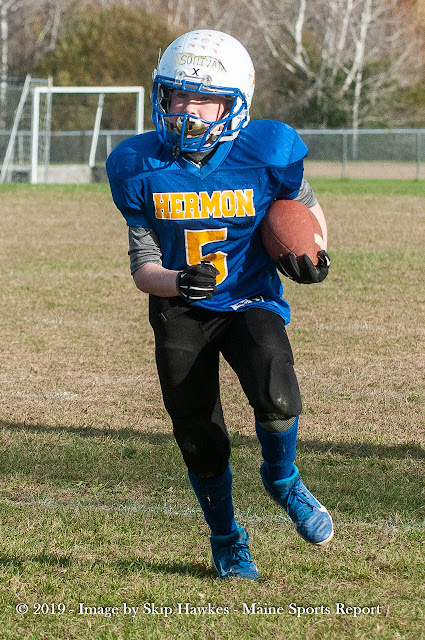