BANGOR - Tuesday night at the Cross Center in Bangor, Central High School of Corinth opened up a six point half time lead in the third quarter to pull out a 56-45 win after holding off a fourth period rally by the Crusaders of John Bapst Memorial High School in schoolboy action. 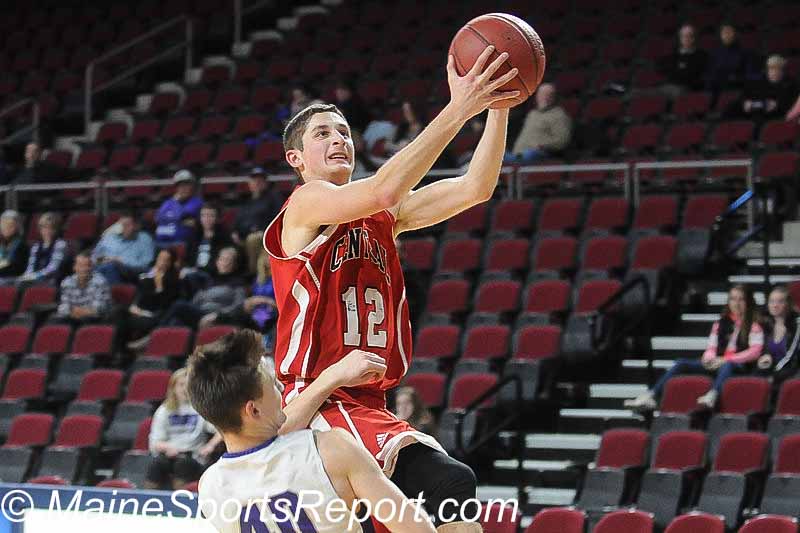 Central's Caleb Shaw (12) gets up over John Bapst defender Isaac Wardwell for a shot during the fourth quarter. (Photo by Skip Hawkes)

Central opened the game with a 16-7 first quarter lead, but the Crusaders battled hard and trimmed three points off that lead as they out scored the Devils 12-9 in the second quarter to cut the Central lead to 25-19 at the half time break. 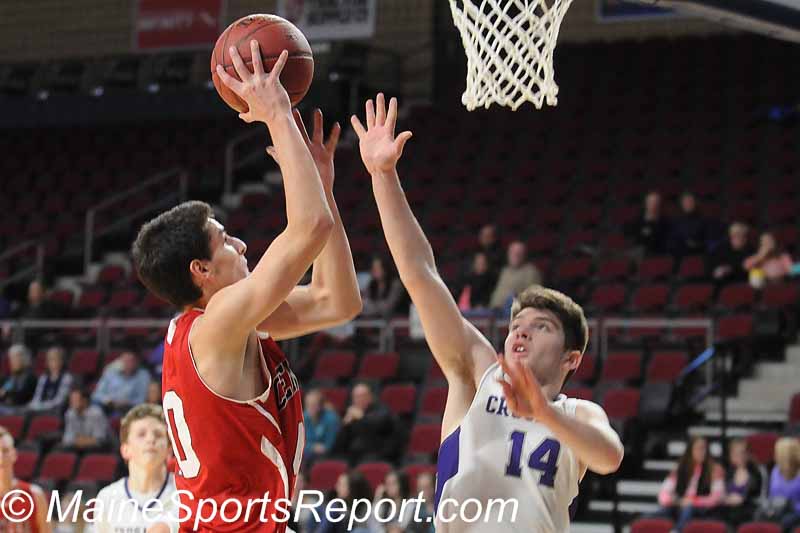 Central's Ethan Mailman (left) gets a shot off over the outstretched arm of John Bapst's JJ Higins. (Photo by Skip Hawkes)

In the third quarter, Caleb Shaw, Micah Ward, and Ethan Mailman combined to score all 15 Central points and the defense held John Bapst to just two free throws in a 15-2 period good for a 40-21 lead heading into the final stanza. 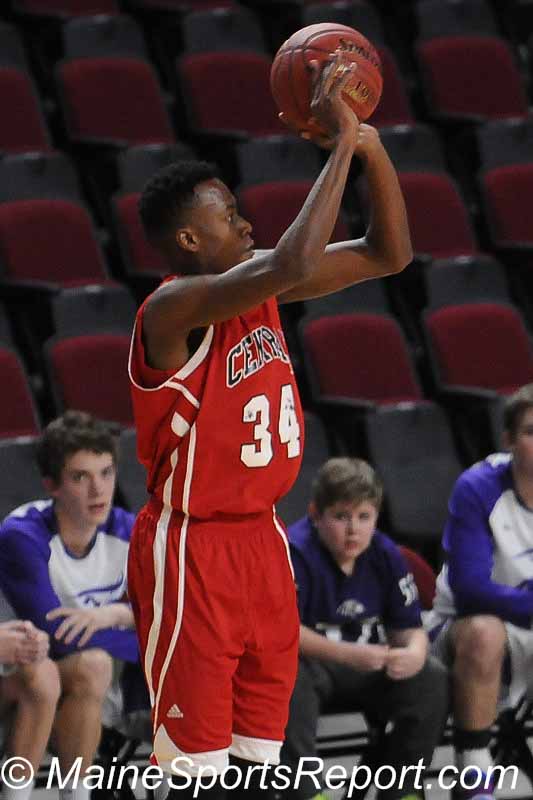 Central's Dylan Gray puts up a jump shot during the first half. (Photo by Skip Hawkes)

The Crusaders would not go down easily, as they out scored Central 24-16 in the fourth quarter coming up short at the buzzer. Darren Hanscom scored all 14 of his game points in the quarter to rally John Bapst. 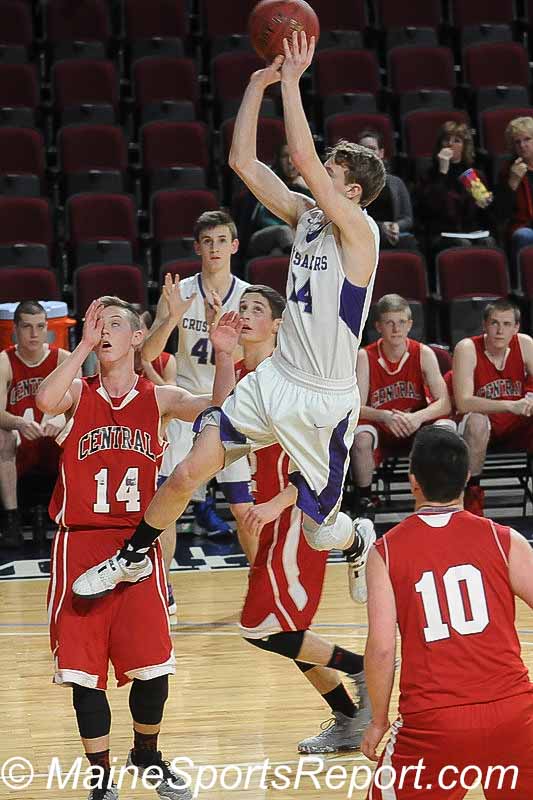 John Bapst's Alex Mooney (with ball) gets high off the floor to get a shot in the middle of three Central defenders. (Photo by Skip Hawkes)

Central had five 3-point baskets, two by Gray and one each from Shaw, Ward, and Mailman. They went 11-for-17 (65%) from the free throw line. 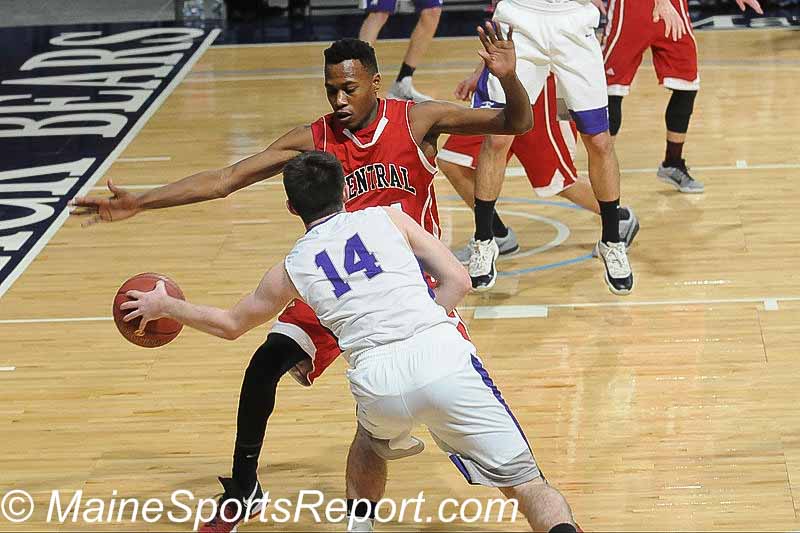 John Bapst's JJ Higgins (14) tries to get a pass around Central's Dylan Gray during the first half. (Photo by Skip Hawkes)

The Crusaders had five 3-point baskets, three by Mooney and one each by Hanscom and Cummings, and they went 12-for-25 (48%) from the charity stripe. 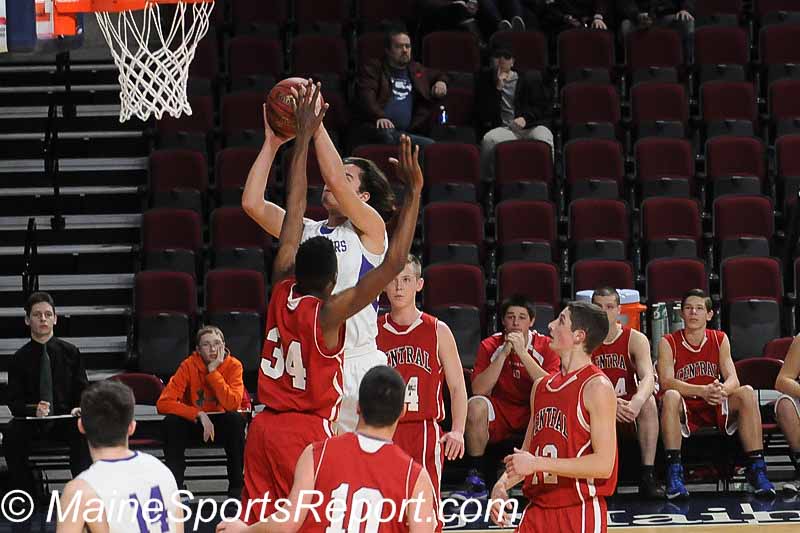 John Bapst's Noah Tomah (with ball) gets up for a shot over Central's Dylan Gray (34) during the first half. (Photo by Skip Hawkes)
Labels: Boys Basketball Central Crusaders John Bapst Red Devils Skip