The Brewer JV girls dug an early hole in the first quarter of a game against John Bapst at the Cross Insurance Center on Thursday night, falling behind 12-2 before battling back to pick up a 38-34 victory over the Crusaders. 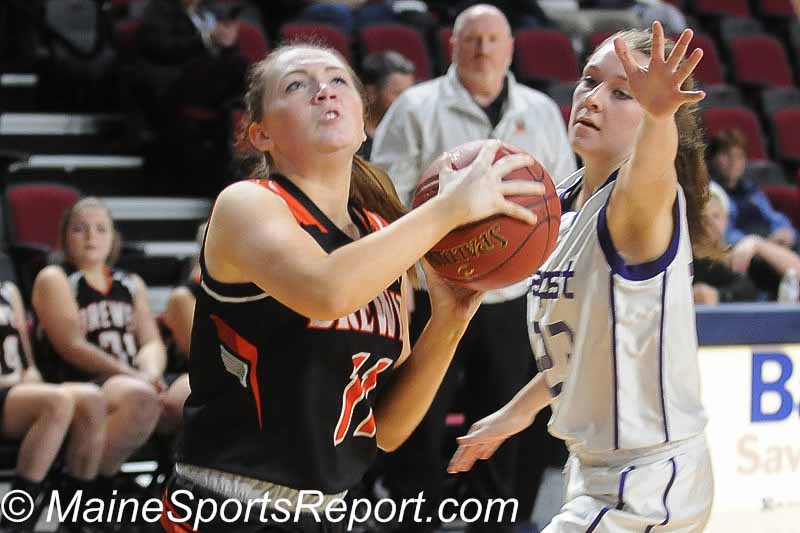 Brewer's Ashley Tanguay (left) looks to the basket for a shot against John Bapst defender Kolby Hendrix during the JV game at the Cross Center Thursday night. Brewer won the game 38-34. (Photo by Skip Hawkes)

Brewer closed the margin of deficit in the second quarter out scoring the Crusaders 8-5 to make it a seven point game (17-10) at the half.

A Grace Robertson 3-point basket with 1:21 to play in the third quarter pulled the Witches even with Bapst at 25-25 after a 15-8 Brewer run.The Witches out scored Bapst 17-8 in the period and took a 27-25 lead into the finbal eight minutes. 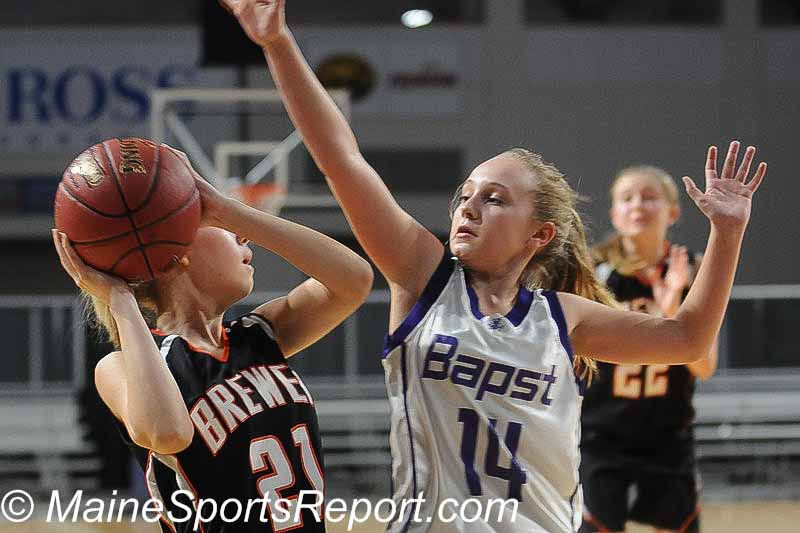 Brewer's Grace Robertson (21) looks to get off a shot as John Bapst's Taylor Perry defends. (Photo by Skip Hawkes)

Brewer was trailing by one point as the clock ticked under the final minute, but a 3-point basket by Ashley Tanguay with 42 seconds left to play put the Witches on top 34-32. Brewer was able to hold on the rest of the way to pick up the four point win.

Tanguay scored a game high 13 points to lead Brewer in scoring. Jordan Goodrich and Cassie Hillman each added eight points for the Witches. Robertson scored five points, and both Jaeda Rogers and Kathryn Austin chipped in with two points. 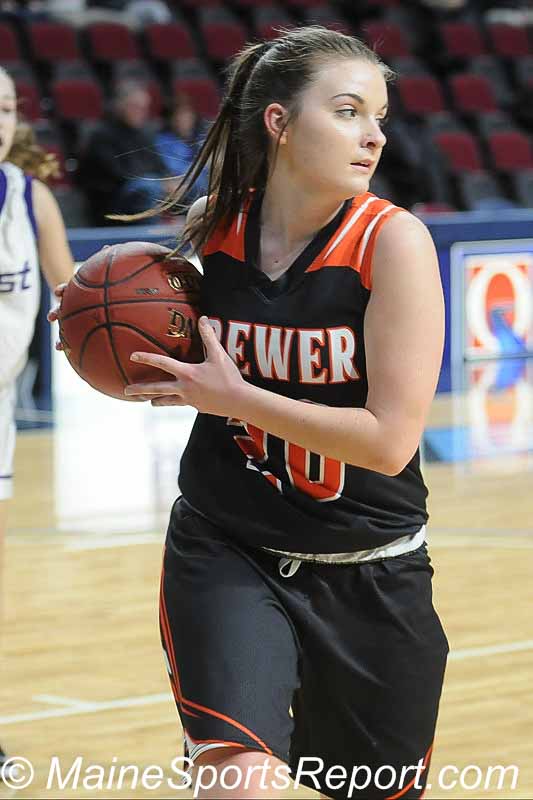 Brewer's Cassie Hillman pulls in a rebound during the second half. (Photo by Skip Hawkes)

Brewer had two 3-point baskets, one each by Tanguay and Robertson, and they went 10-for-12 (83%) from the free throw line. 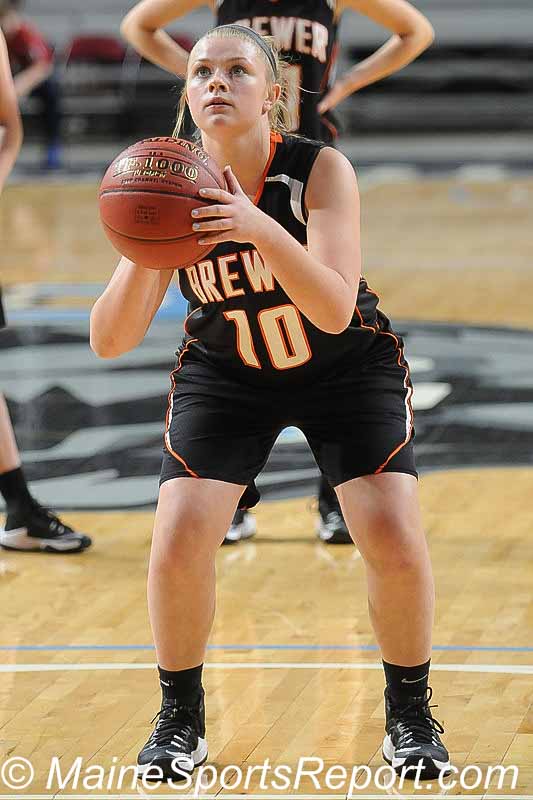 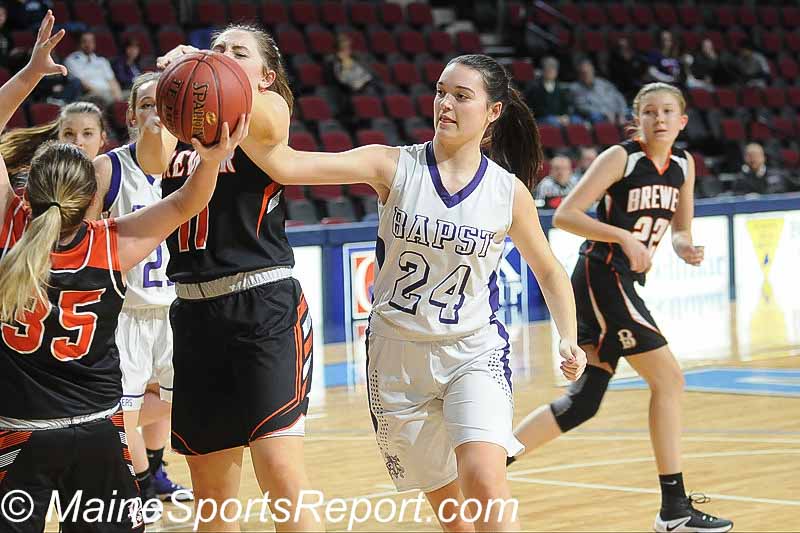 John Bapst had three 3-point baskets, two by Mock and one by Perry, and they went 5-for-16 (31%) from the charity stripe. 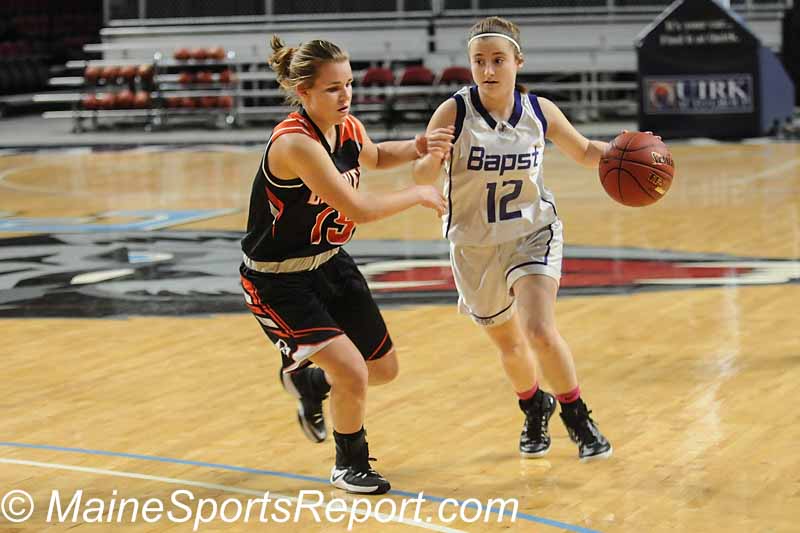