Glenburn boys knock off Clippers, advance to B Division semis

GLENBURN - The Glenburn Chargers had eight players score in a balanced offense 44-25 victory over the Winterport Clippers on Saturday night at the Glenburn School in the final B Division boys PVML quarterfinal playoff game. 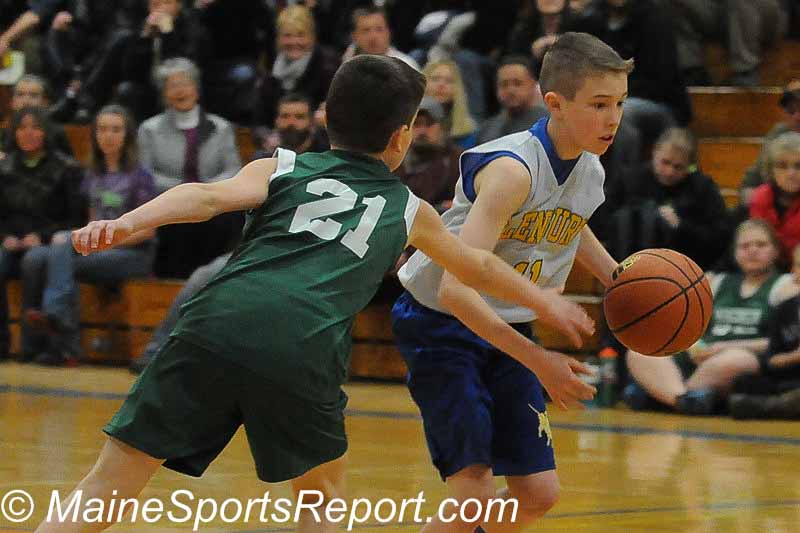 Glenburn's Brandon Butterfield drives towards the basket past Winterport's Garrett McLeod during the first half of the middle school playoff game in Glenburn on Saturday. Glenburn won the game 44-25. (Photo by Skip Hawkes)

Click Here to view and/or purchase photos from this game

The Chargers opened the game on a 5-0 run, and closed out the first quarter with a 15-8 lead. They expanded their lead to nine points in the second period with an 8-6 score, and took a 23-14 lead into the half time break. Almost the entire Glenburn roster saw playing time during the first half.

Glenburn put the game away in the third period out scoring the Clippers 12-4 to take a 35-18 lead into the final stanza. 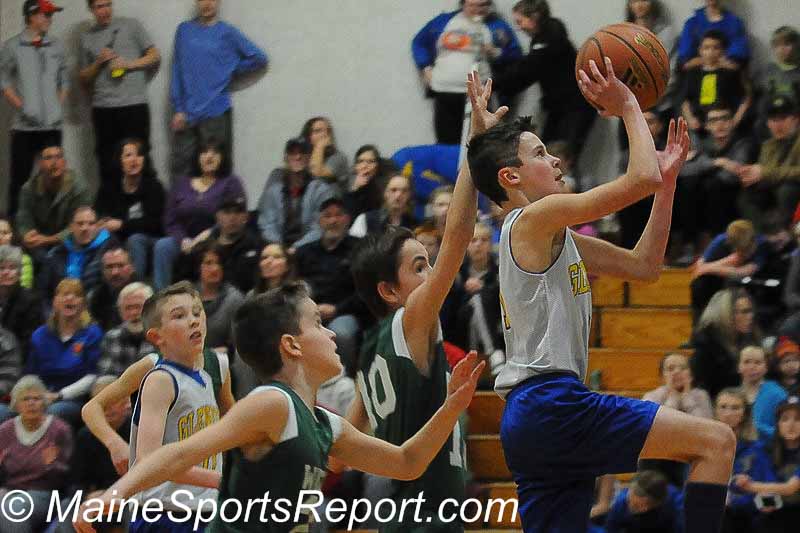 Glenburn's Allen Wheaton (right) gets up for a shot during the first half. (Photo by Skip Hawkes)

The fourth quarter was not so much about the end results of the game, but more about a young man named Devin "Twitch" Twitchell. Devin is a special needs young man, and with the cooperation of the Glenburn team, Winterport coach Reed Farrar put him into the game in the final quarter hoping he would be able to score. After numerous opportunities from his team mates, Devin was unable to get the ball in the hoop. He was subbed for and still received a large applause from the crowd. 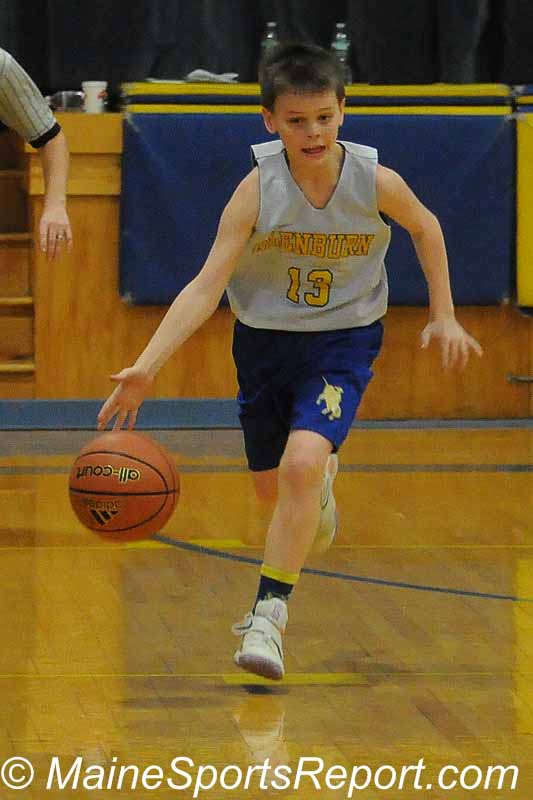 As the game neared it's final couple of minutes, after numerous chants of "We want Twitch" from the bleachers, Coach Farrar sent Devin back out onto the floor. After a few missed shots it looked like the same result as before would happen, but out of now where Devin was on the left side of the floor between the foul line and the basket. He got a pass from a team mate and tossed the ball up and off the backboard down through the net. Twitch scored his first basket of the season, and the entire gymnasium went wild with cheers and applause for this young man. Glenburn may have won the game, but the warm feeling everyone had in their hearts when they left that night was truly what this game was all about. 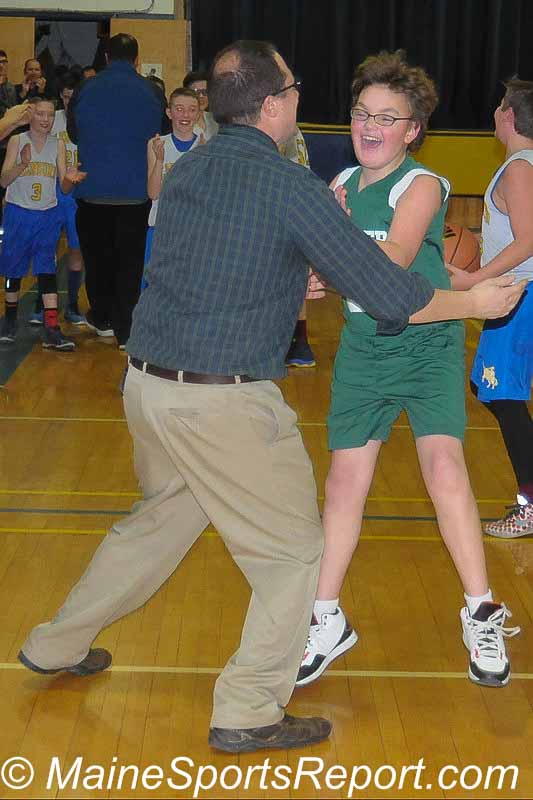 Winterport's Devin Twitchell celebrates with his coach Reed Farrar after scoring his firt and only basket of the season. (Photo by Skip Hawkes)

The Chargers had three 3-point baskets, one each by Butterfield, Wheaton and Baker, and they went 5-for-12 (42%) from the free throw line. 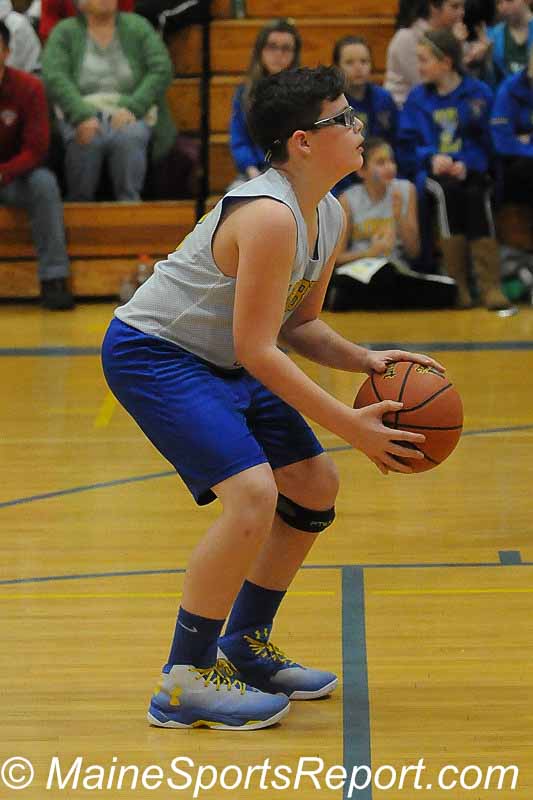 Glenburn's Andrew Day looks at the basket as he prepares to take a foul shot. (Photo by Skip Hawkes)

Josh Carter topped the Clippers in scoring with 10 points, and Sam Burnham added nine points. Tyler Fraser scored four points, and "Twitch" chipped in with his two points. Winterport went 3-for-11 (27%) from the charity stripe. 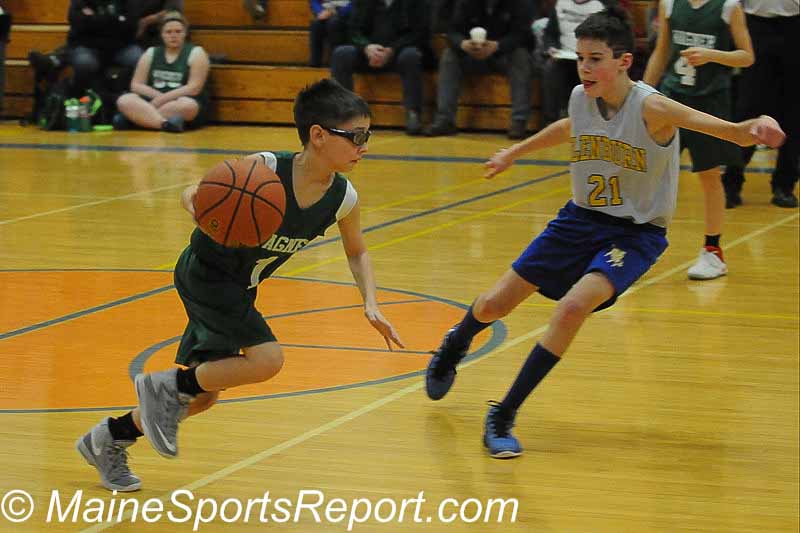 Glenburn (No. 2) moves on to the semifinal round on Tuesday, February 7 at Center Drive School where they will face No. 3 Orrington. Game time is 3:30 p.m.