Saturday afternoon at Hampden Academy, the Nokomis Warriors had no answer for the Broncos Ian McIntyre as he continually powered his way to the basket for a game high 27 points to help Hampden Academy pick up a victory in a Class A match up. 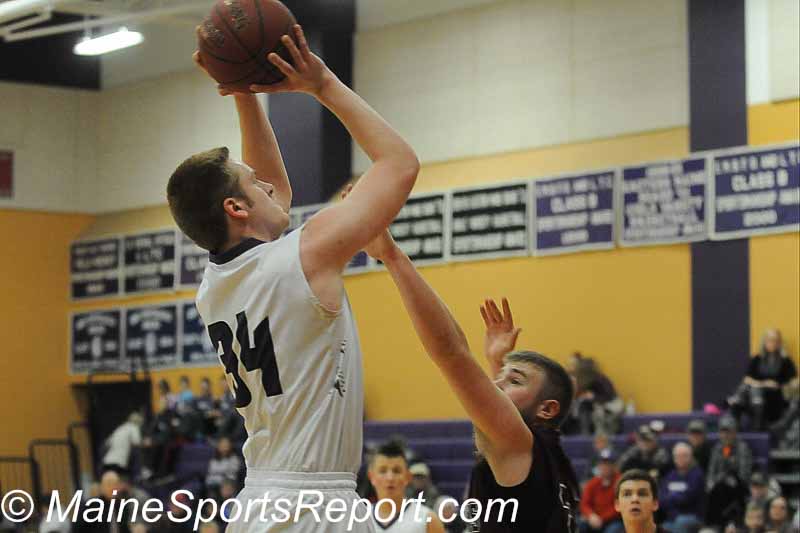 Hampden Academy's Ian McIntyre (34) puts up a shot over Nokomis defender Brad Allen in a game at Hampden Academy on Saturday. Hampden won the game 53-47. (Photo by Skip Hawkes)

Hampden Academy jumped out to an 8-2 lead with 3:50 left to play in the opening quarter, and closed the period with a 16-10 lead on a Mikey Raye 3-point basket at the buzzer. McIntyre scored 10 points in the period to spark the Broncos. The two teams battled through the second quarter with the Broncos getting the slight edge 10-9 to hold a 26-19 lead after Bryce Lausier knocked down a 3-point basket at the buzzer. 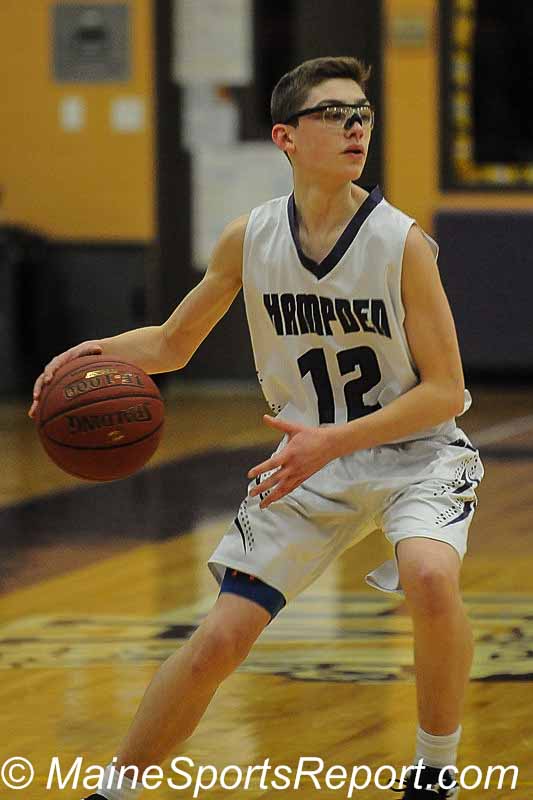 McIntyre added seven points to his game total in the fourth quarter as Hampden out scored the Warriors 15-14 to hold on for the six point victory. 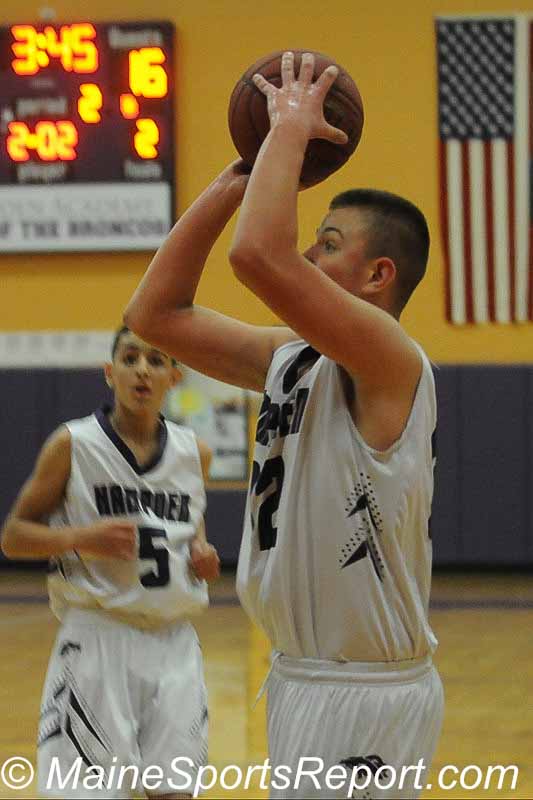 Hampden's Tommy Raye sets to put up a shot. (Photo by Skip Hawkes)

Joining McIntyre in scoring for Hampden was Tommy Raye with nine points, John Wolfington with six, and Lausier with five points. Raye and Kory Winch each added three points.

The Broncos had six 3-point baskets, two each from Tommy Raye and Wolfington, and one each by Lausier and Mikey Raye. They went 13-for-17 (76%) from the free throw line. 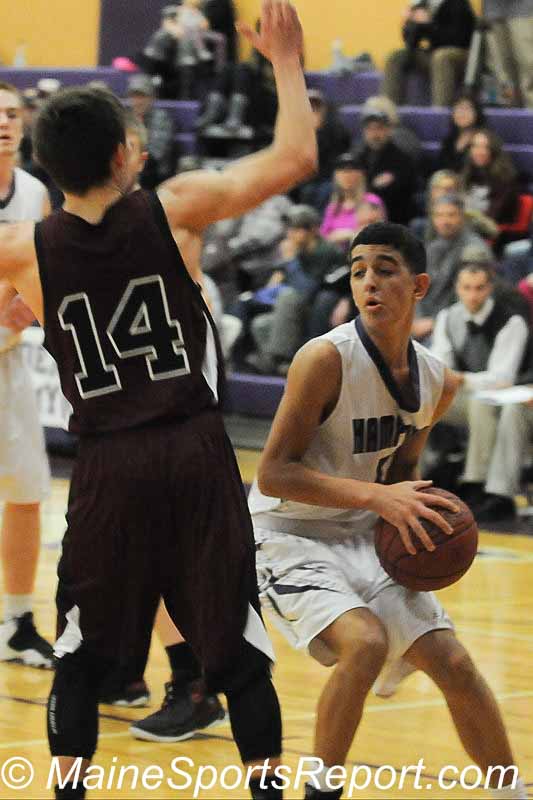 Zach Hartsgrove scored 18 points and Brad Allen had 10 points to pace the Warriors in scoring. Matt Lyford and Josh Perry each added seven points, and Josh Smestad had five points.

Nokomis had six 3-point baskets, two each by Allen, Lyford, and Perry, and they went 5-for-10 (50%) from the charity stripe. 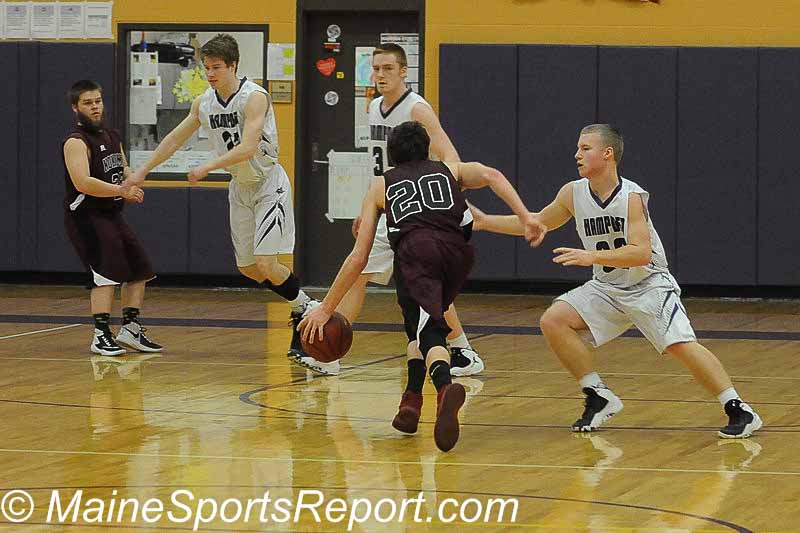 Nokomis's Zach Hartsgrove (20) looks to drive the lane during the first half. (Photo by Skip Hawkes) 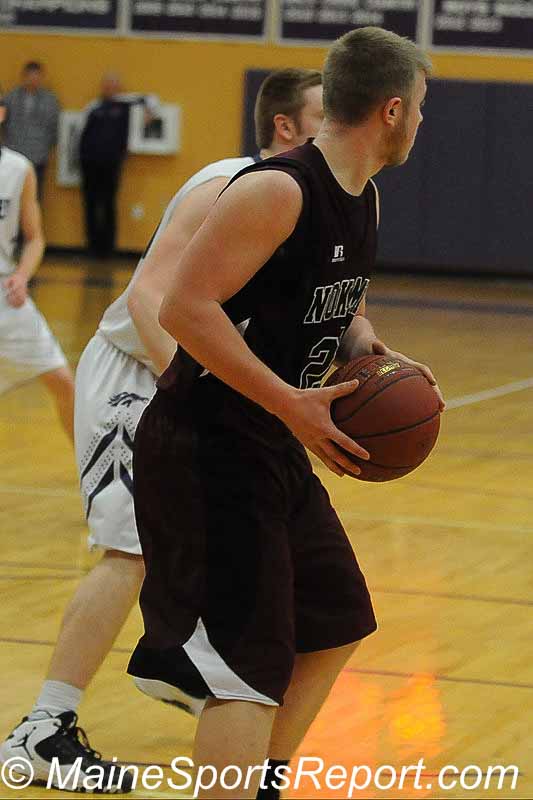