ROCKLAND – The Mid-Coast Youth Basketball league held its boys and girls quarterfinal playoffs Saturday at the Flanagan Community Center in Rockland and the Oceanside Middle School in Thomaston.

In the four games at Flanagan Center the boys played hard and in the end, we saw a couple of upsets.

The day started with No. 1, Machias Savings Bank defeating No. 8, St. George.  In game two, No. 4, Mainely Lobster narrowly defeated No. 5, R&D Trash.

The third game saw the first upset with No.7, Rockport Fire defeating No. 2, Fisher in an exciting game.

The final boys game of the day had No. 6, Cushing defeating No. 3, Stepping with the Stones in a two-point win.
Over in Thomaston, the girls started the day with No. 4, Brooks Trap Mills defeating No. 5, St. George. Game two had No. 1, Bragg Tree Care defeating No. 8, Claws.

Game three of the girls saw No. 3, Cushing defeats No. 6, Camden Financial. and in the final game of the day No. 2, Midcoast Dentistry defeated No. 7, Mid-Knight Auto.

Playoffs will continue Wednesday, Feb. 7, with the girls playing at the Flanagan Community Center in Rockland and the Boys playing at Oceanside Middle School.  Games at both sites are at 5:30 and 6:45 pm.

In the girl's semifinals at the Flanagan Community Center, No. 1, Bragg Tree Care will take on No. 4, Brooks Trap Mill at 5:30 p.m.In the second game No. 2, Midcoast Family Dentistry will battle with No.3, Cushing.

Bracket below is updated 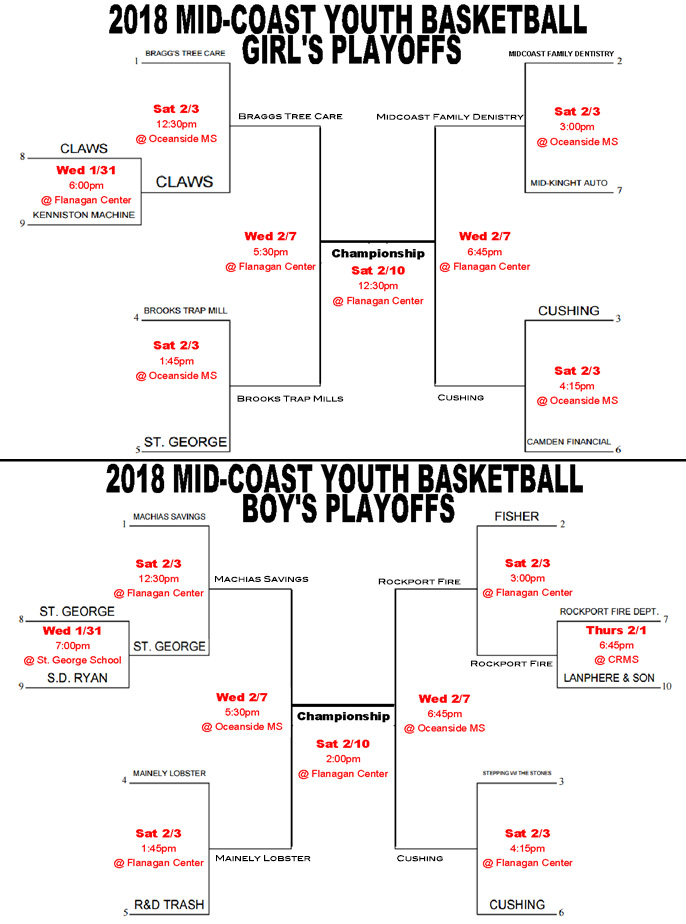